Fiesta Especial...Creating the leaders of tomorrow 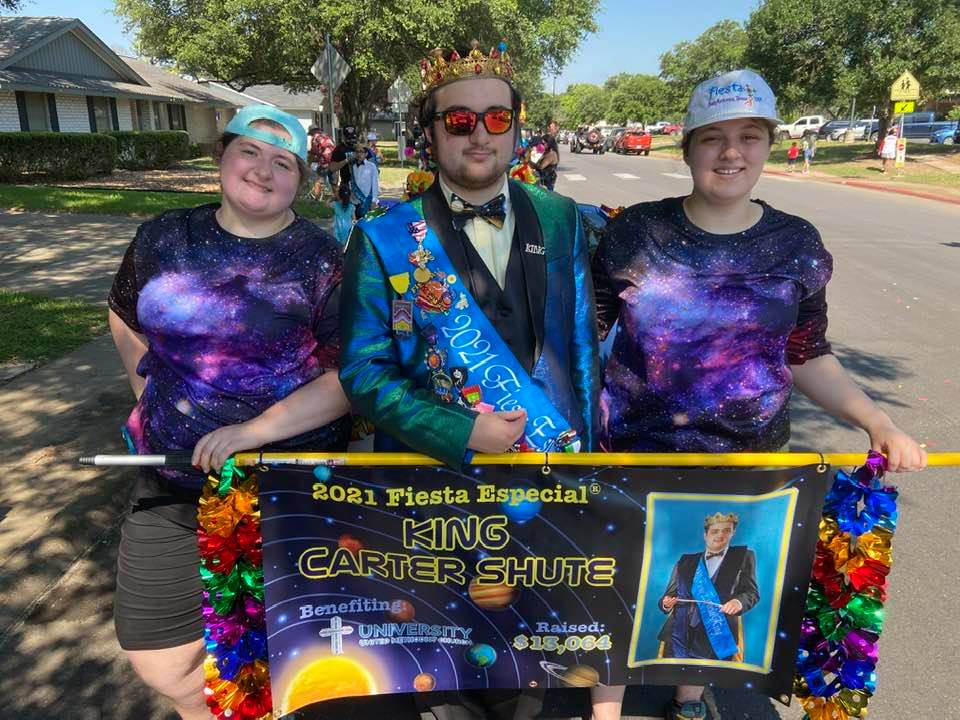 When we think about a leader, we might conjure up an image of someone we've seen on TV, a local politician, or a mentor or family member that has guided us along a successful path at some point in our lives. At disABILITYsa, we think of the numerous young men and women who live with disabilities, faced with an inordinate number of barriers to independence and inclusion, and yet step into each day with the determination to contribute, be role models, and advance the attitudes, policies, and environments around them. These are the men and women of the disABILITYsa Fiesta Especial Royal Court.

Given the platform and highlight of our community's biggest celebration of heritage, culture, and diversity, youth and adults ages 11 and up enroll in the leadership and life skills development program over the summer months each year. Often shy, with low self-confidence, and hesitant about a new adventure immersed in mainstream society, they spend the next 9 months in repetitive activities and appearances that offers once-in-a-lifetime experiences, life-changing moments, self-discovery, skill strengthening and development, new friends, community awareness and more all tied up with a tremendous celebration. Each participant becomes a part of a community that distinguishes achievements, recognizes diversity, and provides a platform for giving back and contributing to the local community which supports our program participants' day in and day out.

Carter Shute is a gregarious 21-year old who is on the autism spectrum. His parents, Tom and Karen, state that prior to participating in the Fiesta Especial® Royal Court, he wasn’t always quite outspoken.

Carter has participated in the Fiesta Especial® Royal Court program for two years. During his first year, in 2019, he enjoyed it so much and made so many new friends that he returned when in 2021 – this time crowned the Fiesta Especial® King upon raising over $13,000 for his charity, Believer’s Garden at University Methodist Church and the Fiesta Especial® Celebration Day. Carter says his favorite part of being in the program was being with people, handing our Fiesta medals (a Fiesta tradition) and spreading the word about how having a disability doesn’t get in the way of being fully who you are. His royal theme was “The Planets”. With a crown topped with each of the planets, he states “the planets may be all different, but they are all still part of the same solar system, just like us.”

In sharing shares his experiences being King of the Court, he states that one special moment that stands out to him was when he was making a Court appearance, along with other Court members, at the Majik Children’s Theater and greeting the children at the theater. His father tells of a time he was greeting the children at a craft fair, one boy came up to meet him and Carter kneeled down to present him with one of the Fiesta medals and said, “I am Carter, King of the Fiesta Especial. Welcome!” The little boy just beemed. In the past, Carter might have just said “Hi”, but as he visits schools, fairs, and community places he boldly talks to other children with disabilities about how one can overcome a disability to become what you want to be. “It’s been a good growth experience for him, and to see him come out of his shell and open up to people – and he didn’t do that a few years ago – it’s been really great to see.”

Beyond the leadership training and activities that Carter experienced, the Carter’s found the activities brought them together as a family and they found community in connecting with other families with children in the program. Tom talks of how he saw three years of alumni cohorts and family work together in solidarity and in camaraderie in the program. Karen has found many life-long friends who relate to the challenges of raising a child with a disability and learn from each other in ways to face the challenges.

One thing that Carter felt that he learned from participating in the program was how to interact and communicate with all types of people. He now attends Palo Alto College where he takes computer science classes toward his aspirations to design video games and majors in Business Management.

Today, the once shy Carter boldly and proudly states, “Don’t let a disability get in your way!”